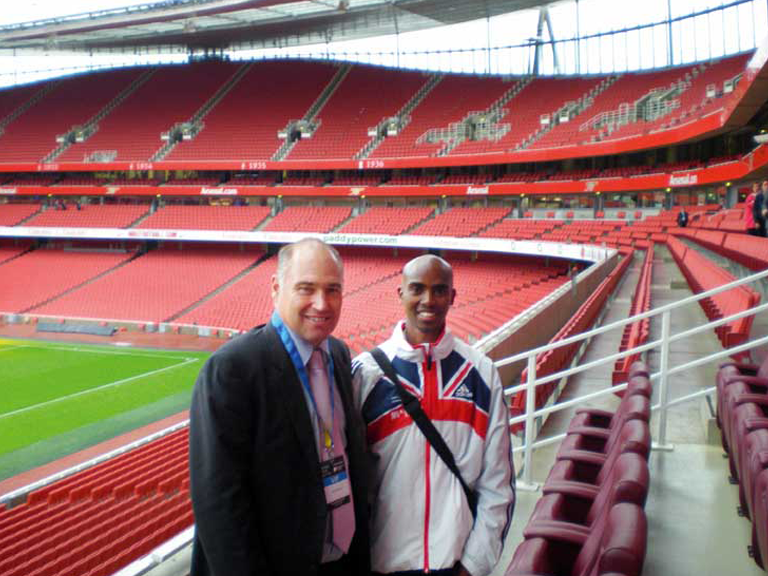 Meet Alan Watkinson, or ‘Sir’ as he’s known to Mo Farah, the man and teacher the double Olympic gold medallist credits for his success on the track…

Alan Watkinson was Mo Farah’s PE teacher. Years later, after having encouraged Farah to pursuer a career in athletics, Watkinson was the long-distance athlete’s best man at his wedding. Watkinson had been responsible for spotting Farah’s talent, for driving him to athletics meetings – teaching him English along the way – and later, providing the best man speech on his big day. He wasn’t the only one. Jessica Ennis and Bradley Wiggins and many more paid tribute to the role of their PE teacher’s in their careers.

Here, Watkinson, who continues to run a School Sport Partnership in west London, reveals Farah’s rise to the top and the importance of a good PE teacher…

Tell us about how you first came into contact with Mo?

He was 11 and so doing his first year at Feltham Community School, he was in one of my PE lessons. He arrived at the school a couple of weeks late because he’d broken his arm playing football in the summer holidays. It has been quite well documented that my first contact with him was in a javelin lesson, which obviously requires stern and strict safety regulations. I had 29 kids sat on the floor and Mo was swinging from a football goalpost!

Did you have any idea when you first met him that he had the potential to go on and become a star?
He was certainly very different! He didn’t speak much English and to be honest, at first, it was very difficult to tell. He was very laid back when it came to warm-up activities, you certainly wouldn’t ever have seen him running hard in those; he’d do a light jog or something else instead.

It wasn’t until he took part in more competitive lessons, working on endurance for example, that he stood out. Then you could tell he was really good. In saying that, you could tell from watching him in the playground playing football that he had a good pair of lungs. He was constantly chasing after the ball when others would punt it and take a breather!

Mo was a huge football fan growing up, so was it hard persuading him to move into athletics?
He was a little reluctant at first to get involved to the extent that I wanted him to, but he’s a real competitor who loves the feeling of winning, so he soon came round when he enjoyed success. There was a bit of bribery, too. We’d get the football out after training while football would form part of his warm-up and warm down. I remember also once telling him I’d buy him a kit if he won a race, which he did.  It was a question of merging the two as much as possible and keeping him involved as much as we could.

“You could tell from watching him in the playground playing football that he had a good pair of lungs. He was constantly chasing after the ball when others would punt it and take a breather!”

Eventually, the realisation that he was a good as we thought he was brought about a change in his own attitude, particularly when he started getting international recognition. He was selected to go to the British Olympic Futures Camp in Florida when he was 15/16. He soon learned that with hard work he could actually compete at a high level, so that was a defining moment.

He came back from Florida a changed man. He gradually got more and more committed, particular after training with people like sprinter Mark-Lewis Francis, 400m runner Tim Benjamin and javelin thrower Goldie Sayers – he realised he not only had talent, but that he needed to work hard to win things.

What was he like as a student?
He certainly stood up for himself, that’s for sure. I think athletics really helped him. Sport helped him. His English wasn’t the best but playing football and running gave him a level playing field with the other students. Sport gave him confidence as a person. I feel very fortunate that he was part of our school.

You were at the stadium the night he won the 10,000, Super Saturday. What do you remember about it and how did you feel?
It was amazing, nothing short of a dream really and very emotional. The atmosphere was unlike anything I’ve experienced before. I was there with my wife and I remember feeling emotional watching 80,000 people cheer a guy I’d known for 17, 18 years, someone who I’d shared a long journey with.

“Football and running gave him a level playing field with the other students. Sport gave him confidence as a person. I feel very fortunate that he was part of our school.”

I was very proud thinking about where we had started and what he had gone on to achieve. He overcame a lot of barriers to get to the top and it’s not very often you find yourself involved in a situation like that.

How important is the role of the PE teacher when it comes to nurturing young talent?
It’s so important. Mo winning his gold medals is testament to that because it’s not just about indentifying and teaching young talent, it’s sending them on the right pathway so that they can benefit from the right coaching and opportunities. That has to happen at an earlier age, so we need to ensure our primary school teachers have the knowledge and the training to help the Mo Farah’s of the future. Of course, we need investment to help grow the legacy of the Games and provide the facilities for people to take part, but teachers have a huge role to play, too.