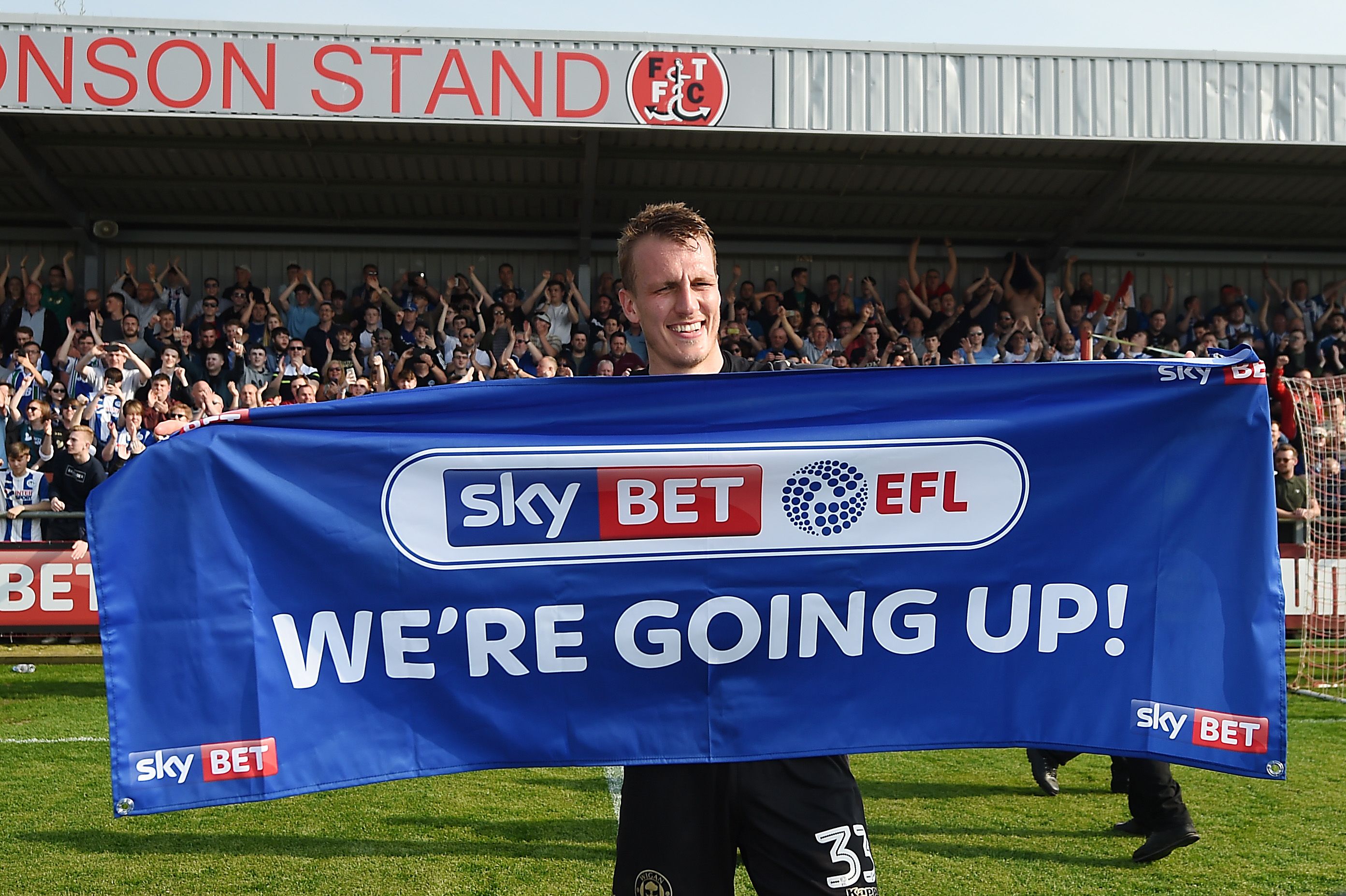 Long before forming the meanest centre-half partnership in the EFL, Wigan Athletic’s Dan Burn and Chey Dunkley shared a common desire to achieve in the classroom, as well as on the pitch. Interview courtesy of League Football Education and their Touchline Magazine.

Both players scooped LFE’s annual Mike Johnson Award for producing the best NVQ portfolio among apprentices across the country, with Dunkley collecting the prize in 2010, while Burn took over the crown the following year.

Fast forward to the present day, the defensive duo have led the Latics to promotion from Sky Bet League One, as well as contributing significantly to a memorable FA Cup run. However, their journeys to the DW Stadium could not have been more different.

He told LFE: “Darlington were going through tough times so I ended up in the first-team, probably due to a need rather than necessarily being ready, but it was a great experience.

“I remember making my debut in League Two, I think we got beat 5-0 by Torquay away with a nine-hour trip back and I was absolutely buzzing just to have made the pitch.

“I never thought I would get to a club like Fulham, it was a big jump from Darlington. My first day of training, I was a bit star-struck with all the players that were there. I went from living at home to moving in with a family down there and it was a bit strange having never been to London before.”

Despite his spiralling success, Burn remained focused academically and ensured he had prepared for an alternative pathway, even piloting a new Performance Analysis qualification that offered 20 extra UCAS points.

The 25-year-old said: “It was just the thought process of doing anything I can to boost my points to get into the best University possible in case that’s the route I’d end up going down.

“You look at the percentage of people who go on to have a long-term professional career and it’s a fairly slim chance, so I think it is good that the education side of the apprenticeship is set up for the academy players.

“I applied to go to a University in America and I was very serious about going out there if I didn’t get offered a pro contract. I know from the youth team I played in, there were two lads who did go over to America to do a scholarship there – one of them is working in Chicago.

“You look back now and see that the education really did help the lads who didn’t get a pro to further their career. Most players that I turned professional with are out of the game now by the age of 25, so that just shows that you do need an alternative.”

While Burn’s rise to the Premier League meant he could put his alternative plans on hold, Dunkley embarked on a full-time degree course at Loughborough University in 2010 after being released by Crewe Alexandra.

“You look at the percentage of people who go on to have a long-term professional career and it’s a fairly slim chance, so I think it is good that the education side of the apprenticeship is set up for the academy players”

“It was a setback for me,” said Dunkley. “But I always thought that you never know what’s going to happen at the end of the apprenticeship, so it was important to make sure you’ve got a foundation away from football as well.

“From the start of my apprenticeship, I wanted to do the 18-unit course, rather than the 12-unit one, because it provided more chance to go to a better University. This meant doing more work in my own time to complete those extra six units, so I think that did help me and prepare me to work independently, which is obviously a key part of learning at University level.

“I always intended on carrying on with football, whether that was non-league or Sunday league with my mates, because it’s my passion,” he said.

“When Kidderminster came in, I was back into full-time football. At that point, I just saw it as an opportunity because I was only one step away from the league, so it reignited a flame for football.”

With his playing career finally on an upward trajectory, it would have been easy for Dunkley to turn his back on higher education. But having already studied for two years, he was determined to complete his degree.

The 26-year-old continued: “I’d done two years of a full-time course at Loughborough and still had one year left, so I decided to take a year out when I moved to Kidderminster, just to get back into the routine of full-time football and getting used to it again. Then I went part-time at Loughborough to complete my degree the year after.

“I could have taken a foundation degree for doing two years but I wanted to finish it. I had to do a lot of work at home with my dissertation, so it was a big challenge to combine that with full-time football, but I managed to get through it.

“I found the work helped me to switch off from football. The second season at Kiddy wasn’t going as well as it did the previous year, so it was useful to be able to put football to one side and focus on work. I enjoyed it because there were a lot of disciplines within the degree, like physiotherapy, nutrition, coaching and various other modules, that were directly related to football.”

After graduating in 2014, football became the sole priority for the Wolverhampton-born defender. In the meantime, Burn had already enjoyed two successful loan spells at Yeovil Town and Birmingham City before returning to the Cottagers, playing nine times in the top flight, including a 2-2 draw against David Moyes’ Manchester United at Old Trafford.

He added: “I feel like I’ve had some good moments in my career and I’ve been very lucky and hopefully there’s a lot more still to come. I probably didn’t appreciate some of them at the time but it’s nice to look back on.”

Another of those moments was scoring the winner for Yeovil in the League One play-off final at Wembley in May 2013. However, the bubble burst for Burn a year later when he suffered relegation from the Premier League with Fulham. After two seasons in the Sky Bet Championship, he left Craven Cottage for Wigan, who then dropped to League One in his first campaign at the club.

“Football as a career is very up and down,” he said. “Pretty much every season I’ve either been fighting for promotion or fighting to stay in the league. I’ve enjoyed all of it, even the relegations to an extent, because you realise how lucky you are just to be playing.

Dunkley continued to experience his own ups and downs at Oxford United, having finally worked his way back up to the EFL in January 2015 when an initial loan spell was made permanent. Two visits to Wembley and automatic promotion from Sky Bet League Two were soon on Dunkley’s ever-growing list of achievements.

“Like Dan, I’ve also scored at Wembley. It was at the wrong end, but they all count,” he joked, referring to his own goal in the 2016 EFL Trophy final defeat to Barnsley.

“When I got my move to Oxford, I felt like that was one of my biggest achievements in football because I’d made it back into the league.

I enjoyed it because there were a lot of disciplines within the degree, like physiotherapy, nutrition, coaching and various other modules, that were directly related to football

“There are so many players who were released or even after getting a one-year pro deal, who are now out of the game. It’s very hard to get back up so it was a real sense of accomplishment to get back to league football.”

After seven years of grinding for every opportunity, Dunkley was at last a man in demand and had the luxury of choosing his next step, joining Burn and the Latics on a free transfer last summer after running his contract out at the Kassam Stadium.

And the two Mike Johnson Award winners have proved to be the perfect pairing, combining to keep 26 clean sheets as a partnership in all competitions so far.

Dunkley said: “It takes time but it’s been good to have a settled line-up at the back and so we’ve been able to learn each other’s game more quickly because we’ve played together consistently.

“I can read when he’s going to mark someone or when he’s going to drop off so it’s developed over time. You pride yourself as a defender on keeping clean sheets, so to have one of the best defensive records in the country is great.”

The double act have been influential in Wigan’s promotion push, as well as their run to the quarter-finals of the FA Cup, which included an unforgettable 1-0 victory against a Manchester City side boasting the likes of Sergio Aguero, Leroy Sane and David Silva.

Having both won Sky Bet League One Player of the Month awards this season, Burn and Dunkley are showing there’s more than one route to becoming an established professional footballer.

Dunkley offered some advice to the current crop of apprentices. He said: “They’ve got to put 100 per cent into everything they do. Obviously, the main objective is to become a footballer, so the bulk of their time has to be spent working to achieve that, but they’ve got to live like a professional off the pitch and part of that is showing maturity in every environment, which for academy players includes the classroom.

“It’s easy to go through the motions but it’s also easy to regret that and I think if you looked back you’d think that you should’ve done more because it can be a great platform to help you move into any career you want to.

“I’m now left with a degree and obviously you don’t know what’s round the corner but I can always use that degree to move into a different career and it gives me plenty of options to pursue.”

Burn, who has also been named in the EFL League One Team of the Year, added: “I didn’t even realise Chey hadn’t got a pro and yet look where he is now, so it just goes to prove if you’ve got the endeavour and motivation to go out and get what you want, with anything and any career you want, you can get there.

“The good thing for Chey is that he’s got his degree already, so at the very least, if football doesn’t work out for him in the long-term, he’s always got that qualification which will help him massively.

“If you’re not getting a pro and you’re in League Two, it’s so easy to fall out of the game. When I was a scholar, Newcastle were in the Championship and I think a lot of them lads probably didn’t take LFE as seriously as they should have because they thought they’ll filter down the leagues if they don’t make it at Newcastle, but that doesn’t necessarily happen.

“I think it’s something players need to take very seriously because they’ll go one day being a scholar, or a professional, and the next day they’re not and it’s hard to make that transition if you’ve not prepared for it.”

Download the latest edition of Touchline magazine (Issue 35) for all the latest LFE news. It includes a full academy league round-up (covering all eight divisions), Apprentice of the Year review and Gillingham academy players discuss their charity trip to Sri Lanka