F1 Champion Lewis Hamilton will quite rightly grab the plaudits for his title-winning efforts, but behind every champion is a team. If you like the idea of being in the thick of the action, then maybe a career in the pit lane, and beyond, is for you?

Member of a typical pit crew include:

So how do you become a pit crew member?

Unfortunately, you will never see a job advert for a pit crew member. Your job can’t just be to remove one wheel quickly. The harsh truth is that you’ll need to be part of the team in some form as your day-to-day role before you’ll get the chance to stand in the pit lane. 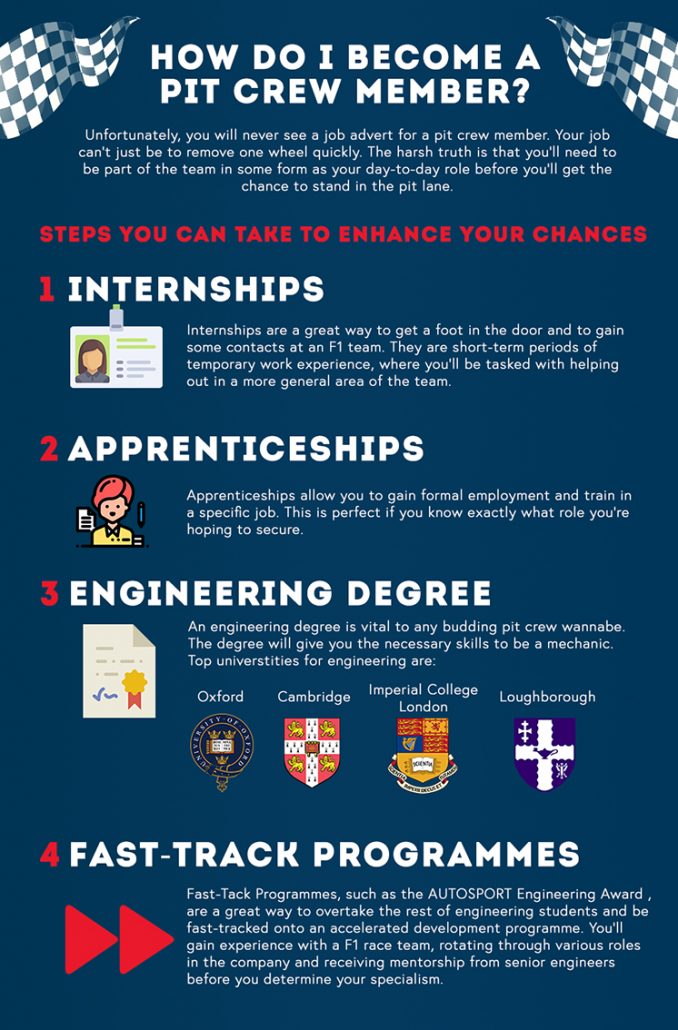 How much does a pit crew member make?
There are various jobs in a F1 team, and like most establishments, as you get more experience the more you start to earn. But if you have just started, here are a few examples of what you could potentially begin on:

The team behind the team
As well as those in the pit lane itself, there are engineers and fitness members there to help their peers get as close as possible to the perfect pit stop. Here are just some of the roles involved in some of the current F1 teams.

At the track
One session per day (Thurs, Fri, Sat, Sun) – about 12 set-ups per session.

AMG Petronas Formula One Team
Training up to five times a week – even coming into the factory during their days off – with three separate pit-stop practice sessions pencilled in during that same seven-day period too.

Fitness app on their phones, where they can log in, track their progress and compare their results with their teammates.

Williams Martini Racing
Training specifically designed for unlikely situations such as a last-minute change of tyre type or nose change.