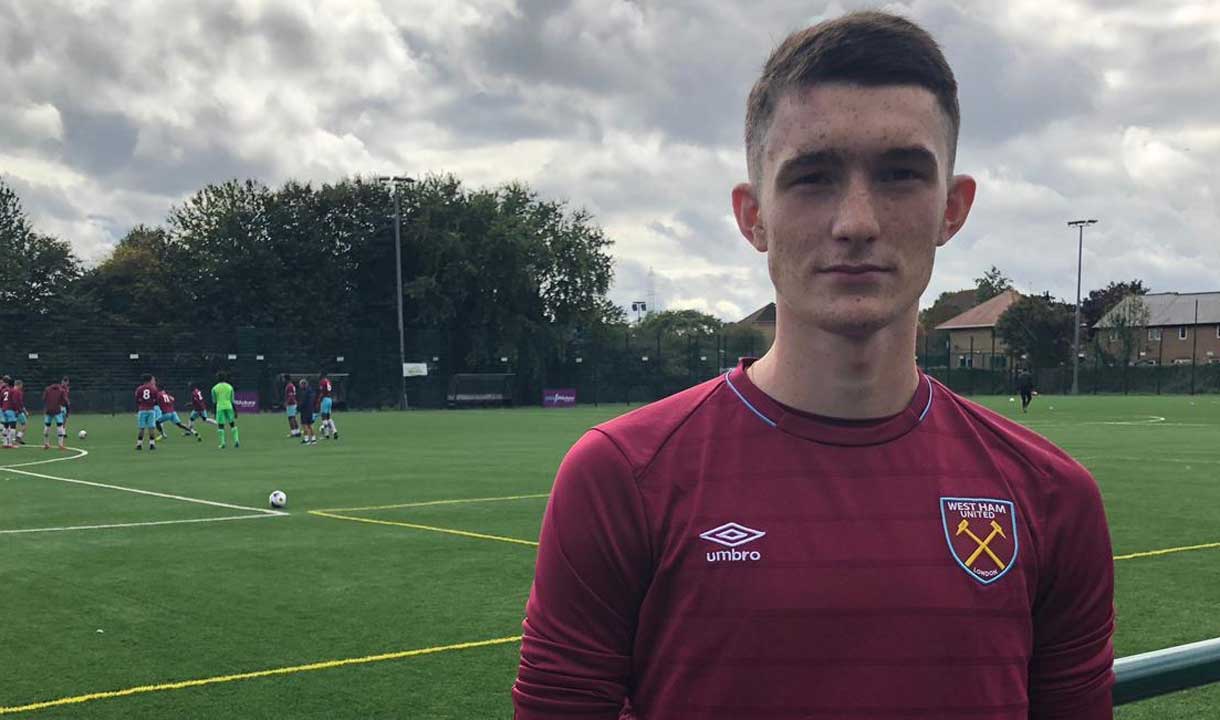 SCL student and lifelong Hammers fan Frankie Taylor had the opportunity to trial with the West Ham United Academy, thanks to the club’s Second Chance Programme.

The two-year full-time education and football development programme for students aged 16-18 has been hugely successful over the past season, with four trophies being won on the field as well as a number of graduates successfully moving into employment, apprenticeships, careers in sport and employment.

Frankie, 17, joined the Second Chance Academy at the beginning of the summer and after impressing coaches while on trial, he made the step up to the Academy.

Embracing the opportunity of combining his passion for football, with a slick education programme delivered by SCL, Frankie said: “I’ve always supported West Ham and I have had a season ticket since I was four, even when we were relegated,” said Frankie.

“To be able to train here on this programme is brilliant. It gives me the chance to follow my ambition to become a top footballer as well as continuing to get my qualifications.”

Revealing that his favourite player is club captain and academy graduate Mark Noble, Frankie added: “Mark Noble is a role model to me because of where he’s come from and the age he started competing at an elite level is similar to my age currently. He is a leader and is passionate about the game, which is how I strive to be.

“When I came onto the scheme, we were training alongside the team from the under-18 academy – being able to look over and see them training was an incredible experience.

“You could see what level you were at and what level you need to get to. I was then at the Academy for two weeks and I felt as each day progressed, I got better and better.

“I integrated with the boys, the coaching was great and the whole camaraderie was a fantastic experience.

“The routine was to train every day from 8.30pm to 5pm and it got me into a routine of being a professional footballer and working hard all the time. They gave me some really useful feedback, so now I know what to work on and how I can improve my game.

“My attitude as a player has massively developed, I knew when I joined that I had to be completely professional.

“My fitness has also improved – to be at the top level you need to be as fit as everyone there. Joining the Second Chance scheme and then going onto the Academy pushed me to be fitter and faster, which has made me a completely different player.”

Jim Hampsheir, WHU Foundation Senior Academy Integration Officer, coaches on the programme and spoke about his experience with the teen: “The first time I saw Frankie play I knew he had the ability to progress further with his football career. Frankie has a great attitude and is a defender who fits well into the modern game. He is hungry to learn and strives to improve in every single session.

“Frankie’s success once again demonstrates the positive impact of the Second Chance programme, which has such a great effect on so many players’ lives. Once players get released they can often feel lost and unsure what to do but this programme opens up other ways for them to find a path to success.”

For more information on the educational programmes SCL offer visit their directory on our website.